Ten years ago, I was looking for a new club. When I walked into club 1300, I met a man that changed my life. His warmth, smile and soothing baritone voice just made me feel at peace. The more I got to know Harvey, the more I knew that this was not just a guy having a good day, but a genuine reflection of Harvey’s character. That was Harvey. Growing up in a large family, then having a large family of his own, he had many stories about life’s lessons and would craft them into speeches.

Harvey also had a story that answered a common question; the question of how he came to need his braces and canes, or later in life, his wheelchair. You would think the story of how he became a walking paraplegic would be a tragic speech, but was actually a demonstration of positive attitude, strength, courage and faith. That was Harvey. It was always surprising to me that there could be that much heart in one man. As an Area Governor, he wanted his contest to be perfect, and was extremely worried about it going well, but that was Harvey. He believed that if people invested their time to go to an event or meeting, they should walk away a better person than when they arrived. He worked tirelessly to make that happen. That was Harvey.

Harvey is survived by his 5 daughters and 12 grandchildren. Harvey's clubs and areas will miss him and all that he did to make us better people. I take my peace in knowing that my friend made it home. Welcome home good and faithful servant. 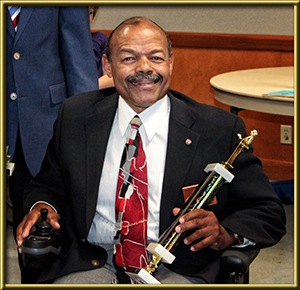