Contestants at the November 9th conference “stretch the truth” to audience delight!

Speech competitions at the district level are always a treat for spectators and when the affair includes Tall Tales, the entertainment factor skyrockets. The big event, emceed by Contest-master Jeanne Cassidy, was held at the La Mirada Holiday Inn and was the grand finale to an action-packed conference that is sure to go down in the record books as one of the best ever! 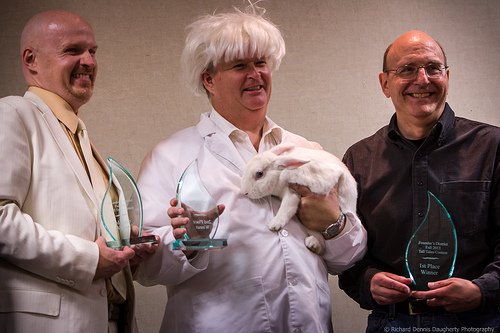 Tall Tales competitor and third place winner, Brian Goodhead, had everyone rolling in the aisles with his “true” story of entertaining residents of the Hannah Barbara cartoon character retirement home. His voice impersonations of Snagglepuss, Yogi Bear and Booboo, and other favorites were spot on, and his humorous writing for these characters was top notch.

Richard Snyder, second place, promised everyone who bought his hair restoration product a full head of hair! But in the end, all the “hare” he could generate was a fluffy, white rabbit. He concluded his presentation with, “…you may think this was a Tall Tale, but you would be wrong! It’s a cotton tail!”

This year’s winning speech by David Moore was a story that took the audience on a great adventure, involving a giant eagle that swooped David up into the air! The two formed an unlikely partnership when David directed the raptor to an easy meal—a couple of mice in a marijuana field. (The mice were clearly “under the influence.”) In the end, as David put it, it demonstrated how to “kill two stoners with one bird.” (Think about it!)

Judges definitely had their work cut out for them. Each and every competitor gave a phenomenal presentation that was memorable and fun. As we always say in Toastmasters, everyone who competes is a winner. But for this competition, that truly was the case. Hats off to Jill Day, John Shealy, Steve Summers, Leonard Szymczak, and Lynn Walford for their brilliant performances.