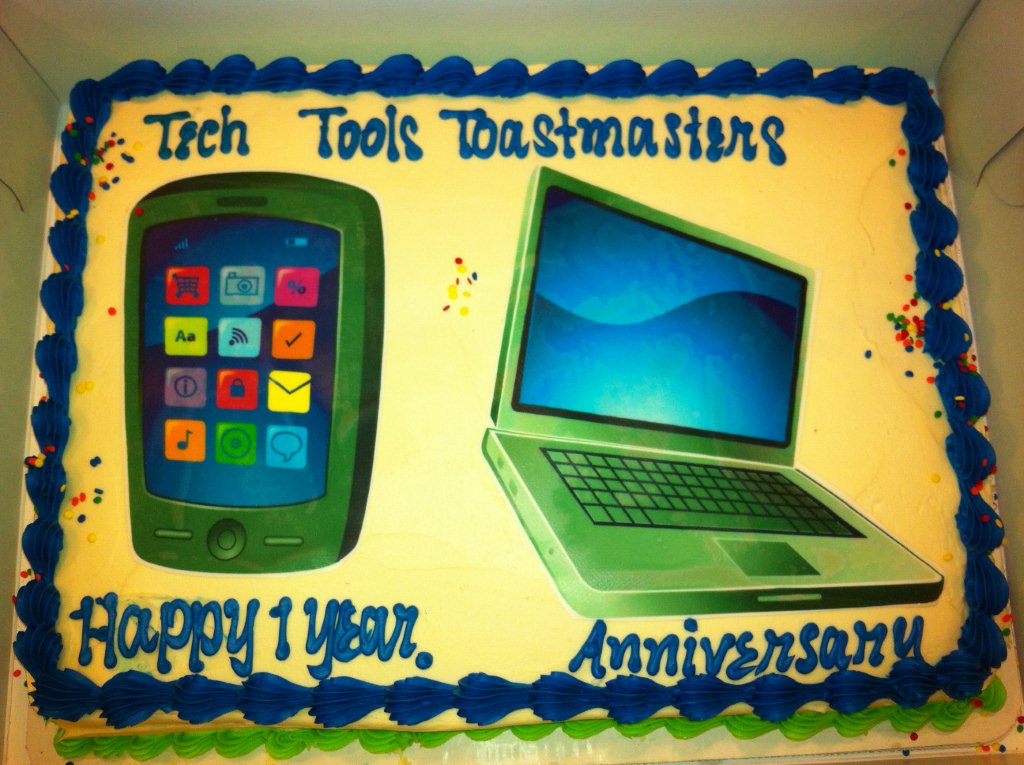 Founder's District Tech Tools Toastmasters Club #2094157 celebrated its first anniversary with an open house that enthralled all in attendance. The event took place on Saturday, November 10, 2012 from 6:30 to 8:30 p.m. at the Tyrol Plaza Club House at 891 S. State College Blvd., Anaheim,CA 92806.

There were many things that made this a remarkable event. One of the members had a very interesting cake baked and decorated with a smartphone and laptop. It was a beautiful and attractive cake! Celly Adamo, DTM, PDG traced the history of Toastmasters and its founder, Ralph C. Smedly, from 1903 to the present.   Then, there was a panel discussion of five tech savvy individuals who described various benefits of joining a specialized Toastmasters Club. The Tech Tools club focuses on teaching and talking about technology, smart phones, laptops, iPhones, and other tech gadgets. In addition, we discuss their benefits to, possible dangers to, and impact on individuals and society. Following is a list of panelists and their topics:

At the close of the panel discussion there was a Q and A session. It was indeed an insightful discussion.

Jennifer Elam, CC, CL, Division E Governor said, “It was a very successful evening and we thank the members of Tech Tools for sponsoring the Open House.” She also said that as the Founder’s District supervisor for the Tech Toastmasters Club, “I am so proud you are in my division. You have created a unique and much-needed club, and during this past year your club has accomplished much.”

The Tech Tools club has indeed accomplished much since its chartering in November, 2011. It has been the precursor to the chartering of two more Tech Tools Clubs in District 1; Tech Living and Tech Tools Club of Long Beach, CA. It has established 4 community partners. These include Tyrol Plaza Senior Club House and The New Horizon Computer Learning Centers-- where meetings take place at no charge to Tech Tools-- OneScreen, a video technology company which will be teaching Tech Tools members and guests different aspects of video production using digital media, and OneOC, a volunteer agency in Orange County that provides volunteers to Tech Tools. It has welcomed over six tech-savvy guest speakers for Tech Tools meetings, from Wireless Advocates--experts in smartphones and other tech devices-- to Rodger Cota, DTM, PDG in District 1. The club has recruited some incredible tech savvy members who act as Tech Tools experts, supporters and advocates (Krish Krishnamurthy, ACS, ALB; James Paget, DTM; Mahesh Patel, DTM; Mahender Adluri, and others). The club has seen a published technology poem entitled “The Night Before Christmas” by Linda Jaekels, DTM. The group has kept abreast of the latest news articles and developments concerning various technologies, theories and personalities.

In addition, “The club has been able to educate many of us less knowledgeable members to becoming more knowledgeable and less afraid of using our smartphones and other devices. I even learned much about Steve Jobs and other tech personalities,” said Linda Jaeckles, DTM. Jaekles is the club mentor and is just beginning to learn more about e-mail, Skype, and basic tech skills.

Guests are always welcom, and the club is currently accepting new members.