In the afterglow of the 2016 Toastmasters International Convention, it was time for Founder’s District to come together for its first District Executive Committee or DEC meeting of the 2016-17 administrative year that took place at the Garden Grove Community Center and was attended by just under 100 members.

There would be the usual discussions of approving meeting minutes from prior DEC meetings as well as the annual budget. Having been part of district boards in the past, budget discussions usually are long and, at times, a little contentious.

That wasn’t the case here.

Thanks to thorough research and an even more thorough explanation of the tenets of this year’s budget by Founder’s District Director, Siri Payakapan, there were no questions raised about the budget nor were there any objections to the proposed numbers. As a result, the district council as a whole slid across that section of the agenda as easily as a figure skater making figure eights on the ice rink.

This meeting wasn’t just about administration. It was about looking back, showing appreciation, the latest greatest inventions for Founder’s District and warm fuzzies.

Program Quality Director South, Dan Cossack, unveiled a new website dedicated to Founder’s District under the URL name http://my.foundersdistrict.org, which is available now. This is a tremendous new benefit for all Founder’s District members that will really personalize the Toastmasters experience for each and every Founder’s District member. There are videos shown of Founder’s District TV as well as a feature to establish a login and password for membership information and tracking of goals among other features. Development continues on the new site as more features are added each week.

Dan even had the audience write down warm fuzzy messages on little index cards in multiple colors recognizing someone or someones at the meeting that impacted certain members in certain ways. As a result, members were walking around the room in order to hand out warm fuzzies to other members. What a great way to break the ice between friends that hadn’t met as of yet as well as making members feel good about themselves and how they affect other members even if they aren’t aware of that impact until they receive the warm fuzzy.

Program Quality Director North, Karen Lucas, challenged 10 audience members to rush up to the stage if those audience members believed they could one day be Founder’s District Director like Siri currently is. It was done to make a point of how most of the Founder’s District leaders were encouraged and mentored towards taking on leadership roles. It’s also indicative of those leaders’ willingness to reach for the stars. It just so happens that Karen’s main program is called “Reach For the Stars”, which encourages members and leaders to step out of their comfort zone and go clubbing by attending other club’s meetings. Then, there’s attending and participating in district conferences, training seminars and contests to round out the Toastmasters experience in Founder’s District. Each member will earn a certain number of stars based on attending other club, area, division and district meetings and events among other ways to amass stars. Stars can also be earned by clubs for membership, educational achievements and much, much more. Stay tuned for announcements on what those stars can become as they are amassed by members and clubs alike.

Then, it was time for the recognition portion of the meeting.

The Spirit of Excellence Awards were given to Michael Alexander and David Moore.

Michael has been in Toastmasters for 25 years and has done it all like a Toastmaster tenured that long tends to do. He has mentored 2 clubs, one of which he was a co-founder for. He is a 2-time district chief judge. More than that, he’s as funny as he is colorful. Talking with him is bound to lead to laughter and the desire to stay in touch with him. He’s also an avid motorcycle rider, which gives him a cool element to go along with the great Toastmaster he has been for a long time now.

David is always a presence because of the sharpness of the suits he tends to wear. He’s also an excellent and successful Founder’s District leader through building several new clubs and mentoring 2 others. He’s also very proficient and steady when it comes to running through the various Toastmasters manuals, which makes him a leader by example.

The recognition wouldn’t stop there. It’s a fine Founder’s District tradition to recognize the excellence of its members when they step out of their comfort zone to help themselves and other Toastmasters achieve success in and out of Toastmasters. Stepping out of one’s comfort zone was a common theme surrounding the meeting, especially after Area A-5 Director, Barbara Stickler, brought up the notion as part of the opening inspirational address after the meeting was called to order by Division D Director, Tim Hollenbeck, also known as the human bullhorn because he doesn’t need a microphone to be heard by anybody in the same room with him.

The following individuals that were recognized as the meeting went on epitomize the value of stepping out of one’s comfort zone in order to shine and stand out from the crowd.

Both Ann Shimizu and Richard Snyder were given Area Director Special Awards. Ann’s ability and willingness to be personable, helpful and tenacious make her a Toastmaster to be reckoned with.

Richard chartered a new club that initially entered Toastmasters through Area D-2 called OC Debaters. The club officially chartered last March and then achieved Select Distinguished status during the same year it chartered. Richard was the chartering President and the inspiration behind the club along with his partner, OC Debaters Vice President of Education, Chris Collins. Richard also successfully guided the clubs of Area D-2 including helping Albertson’s Vons SoCal Toastmasters Club to achieve club distinguished status for the first time.

Special awards were also given to division directors Michelle Bender, Marie-Noelle Palermo, and David Moore for achieving President’s Distinguished Divisions. Michelle Bender also received the prestigious District Director Award for her role in Division B. Her division was the only division to not lose any clubs during the year and had the highest number of club officers trained. Michelle attributes her success to the monthly division newsletter that keeps their members in touch with what is going on in Toastmasters and specifically in Division B. 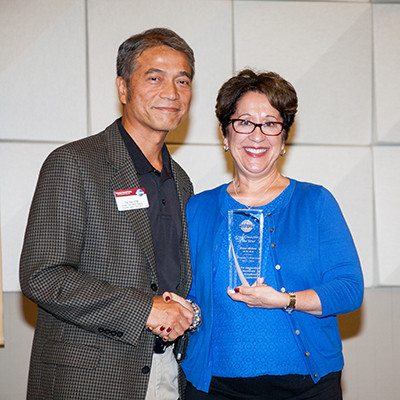 Jeanne Cassidy was recognized with the District Director Award for her role as the District Reformation (Split) Committee Chairperson. This was one of the toughest jobs during the 2015-2016 year as we had heated debates on both sides of the issue. Jeanne’s experience and cool demeanor as a leader helped to make the process go as smooth as possible. The facts were well researched and publicized making the vote at the Fall Conference an overwhelming success.

The Area Director of the year was Rose Abbott. Rose lead her area to becoming President’s Distinguished and proved very effective maintaining consistent and open communication with all leaders and members of the area.

The Division Director of the year was one of the recipients of the Spirit of Excellence Award, David Moore. David had perfect attendance at all DEC meetings during 2015-16. On top of that, he chartered 2 new clubs and proved to be tireless in terms of mentoring area directors and club officers.

Finally, the Toastmaster of the Year was Ursula Bell. Ursula is very content to remain in the background. However, with her ever-active involvement in taking on club office after club office combined with being a 4-time area director, special assistant to Founder’s District mainstays, Frannie and Norm Stein, as well as helping special children with special needs in conjunction with the Special Olympics, it was difficult for Ursula to avoid recognition for all of that.

Immediate Past District Director, Pan Kao, who announced the winners of Area Director, Division Director and Toastmaster of the Year, also made a special presentation of Distinguished Toastmaster, which was bestowed upon Jeanne Cassidy. Jeanne will be relocating to Boston before the Fall Conference so the district decided to present her DTM medallion early.

The next Founder’s District DEC meeting is on October 26 with a special visit and educational presentation by our Region Advisor, Linda Rhea. Although Linda is from Colorado, she has a long history with veteran Founder’s District leaders. This is a great chance for you to speak with an experienced Region Advisor and learn helpful ways to make our district a President’s Distinguished district this year.

I would summarize myself as a driven and determined individual who takes life seriously, but not too seriously, and who believes in the concept of working hard and playing hard. At the end of the day, success isn't about what you have. It's about what you give.